Millennium Development Goals (MDGs) initiated a Global vision for improving the standard of living, sustaining the natural environment and living coherently in the 2nd Millennium. This includes the MDG goal on education and the stride to Achieve Universal Primary Education.

Papua New Guinea (PNG) as one of 193 Member States of the United Nations (UN) signed up to this union right after its independence on the 10th of October 1975. MDGs from 2000 to 2015 had eight goals related to

About this article: This is an original work by the creator of PNG Insight blogs and websites. The work in a written assessment for the Post-Graduate Diploma in Leadership & Development at the Pacific Adventist University. It is part of the work on Education and Development in Papua New Guinea that was accredited with a GPA of 3.84. For more info, contact me at info@pnginsight.com

PNG’s government departments, and donor agencies, were instrumental in developing, assessing and reporting aimed at achieving the MDGs in the last 15 years.

The former Prime Minister and founding father of Papua New Guinea late Sir Michael Somare, in his remarks on the 2004 MDGs report, stated that performance at provincial and local levels was ‘mixed’ (Undporg, c2004).

How can PNG go forward with better results? The 8 recommendations in this report can have a positive impact on the overall PNG’s achievements of Universal Primary Education. Politicians, education leaders and implementers need to take this report seriously.

What is Univeral Primary Education, UPE?

UPE is Goal 2 amongst the eight MDGs. The goal emphasized the need for compulsory, free and quality education for both boys and girls of primary school age children.

Primary education, especially the education for children seven to fourteen years of age, is seen as a powerful driver for social and economic development and for archiving other MDGs. (Worldbankorg, c2003).

Structural Reform (1993) came into effect in PNG where community schools ‘ topped up’ to primary schools. Instead of Grade 1 to Grade 6 with an examination at the end of year six, the elementary schools had Grade 1 and Grade 2 identified as Elementary 1 and 2.

The transition happened at the end of Elementary 2 where pupils move into Grade 3 and continue to Grade 8 without having to sit any national examinations in between.

Evidently, the structural adjustment increased the progression rate from 41 percent in 1992 to 73 percent in 2001 (Primary School Age, UNICEF PNG, n.p.).

The focus, as far as UPE was concerned in PNG, was geared more towards the seven to fourteen years old and less on preprimary and post-primary levels.

The diagram illustrates a standard educational structure by considering existing structures in the United Kingdom and International Education Agency (IEA) in PNG. 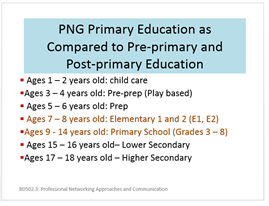 There is an urgent need for the National Department of Education (NDoE) to have a centralized data collection mechanism to collect, analyze and present accurate reports and or disseminate them to the Papua New Guinea (PNG) government and stakeholders.

Even nearly 5 decades years of independence, the NDoE through the Measurement Service Division (MSD), lack the ability to gather accurate data nationwide.

This write-up emphasizes the importance of achieving not only Universal Primary Education (UPE) completion but also proposes a way to improve educational data gathering in PNG.

Policies on structural, examination and school fees at primary schools were implemented to achieve GER of 85 percent, CRR at 70 percent and YLR at 70 percent by 2015 (MDGR, 2004).

In fact, the rates were set below 100 percent to be more realistic and achievable. For example, expanding access at elementary schools is directly proportional to GER. The understanding was that if elementary schools were established in each village, enrolment would increase.

Also, within the primary schools, the number of students continuing school to Grade 7 is maintained with the phasing-out of examinations at Grade 6.

The NEP 2005 – 2014 identified enrolment age at six years of age. Enrolling students early, at an age of 6 or 7 years, in elementary schools increases their chance of remaining until completing primary education.

Cultural obligation (especially on girls) and intrinsic social norms tend to force students out of school, especially when there is a disproportion in the age gap within the classroom.

It is a serious concern for students who may have been in their late adolescence and early teens and doing Grades 6, 8 or 10.

The table shows a projection of students’ enrolment age. Over a third of students enrolled in Grade 1 on 1999 aged nine and ten. In Grade 10 they would have been in their late adolescence.

2.2. Pre-reform and post-reform: Comparison of Grade 6 and Grade 8 data

Recent policies, in particular, the Tuition Fee Free (TFF) Policy 2011 have been thought to have positively impacted school enrolment and retention.

However, data from primary schools before and after the reforms have indicated little improvement.

The number of Community Schools (now Primary Schools) increased every five years in the hundreds until 1999, but was unchanged in 2015:

There is a strong indication that after 15 years of MDGs, the numbers of primary schools had remained static, and there was very little increase in the number of students taking exams.

PNG’s inability to maintain and identify the development dilemma in these two key areas could be attributed to several factors.

The key inadequacies are the inaccurate data and a lack of policy guides: either way, there was gross misinterpretation and representation of data from the start.

A holistic approach is required at all levels of education, especially involving the churches on education and development fronts.

At elementary levels, the demand for teachers saw untrained teachers, who were educated to either Grade 6, Grade 8 or Grade 10 recruited to teach elementary pupils.

The pupils would have been taught by certificate holders at Grade 1 and Grade 2 were now taught by teachers with very low English and mathematics competencies.

Improved training for teachers, particularly in Literacy and Numeracy, at Elementary schools can improve the quality of knowledge and skills (Ivan Ngoboka, c2015) that are being imparted to students early during their education life.

The report uncovered that ninety percent of school-age students have not attended school, the attrition rate at forty-five percent and the curriculum was long overdue for reform.

The plans after the 2nd Millennium also took into consideration the MDGs. In particular, UBE was aligned towards achieving compulsory, free and quality education for all young boys and girls – a sectorial policy framework built on MDG Two, the UPE.

The focus of these plans was to increase access, retention and quality by:

3. ACHIEVEMENTS AND CONSTRAINTS: A COMPARATIVE ANALYSIS OF RWANDA, PAKISTAN AND PNG

The numbers indicating their positive story:

It was indicative that Pakistan was not going to achieve UPE two years before 2015.

A report on Pakistan’s constraints and challenges summed that the government needs to show a ‘high level of political will’ to achieve UPE (Zakar, Muhammad Zakria et al, 2013).

There was significant variation in enrolment rate where some parts of the country were at 60 percent whilst one was at as low as 39 percent.

The decentralization of education functions resulted in complacency in many parts of Pakistan.

The following are obvious constraints, among many, that hindered achieving UPE:

PNG’s government policies on education and challenges are manageable and achievable. It can Achieve Universal Primary Education.

UNICEF Deputy Director for East-Pacific highlighted that if Cambodia, a poor country, could achieve UPE ‘there was no reason why PNG could not do it’.

The projected number of primary school enrollment by 2014 was 90,703 students (NEP 2005-2014). Indicatively, the number of students sitting exams surpasses the projected figure, and students present in the classrooms at lower secondary schools remain very low.

In the same year (2015), there were 2263 primary schools and 256 secondary schools. In view of these figures, it appears that infrastructural development does not catch up with population growth.

To fulfil policies and plans on UPE in the country, both educational and political leaders at national and local levels must know that there is a need to invest time, money and effort in education.

”… the quality of leadership demonstrated to lead the educational change [in PNG] has been disappointing. Inadequate leadership at the administration and curriculum levels had a negative impact on the quality of education. Achieving quality education has also been hampered by inadequate funding, scarcity of skilled human resources, and inappropriate infrastructure in all educational institutions” (Hindawicom, c2011,Volume 2011).

In fact, there are similarities between PNG and Pakistan as far as constraints are concerned. It was difficult to identify a developing trend given limited facts and figures.

Whereas, Rwanda had presented a clear case. PNG needs to learn from success stories.

PNG has many constraints with its growing population. There is a need for collecting and disseminating vital statistical data.

This study proposes that a data collection mechanism is established to address the problem of the unavailability of reliable data.

To create an independent data management organisation, separate from and from the National Planning Department, NDoE and MSU.

One way to make it happen is to create a customized website for collecting useful data for measuring key UPE indicators. The education department has what is called the ‘SDCS’ (Students Data Collection System). It needs to ensure that this system is internalised and run by education officers so that data and information can be accurately captured in real time.

This exercise has to be made mandatory for schools in the country to comply with.

The achievements of MDG were sub-standard, there were strides made in the formulation of educational policies and plans aligned to achieving UPE. What is needed now more than ever is ‘political will‘.

Learn the lessons from Rwanda and Pakistan to Achieve Universal Primary Education in Papua New Guinea.

To achieve MDG goal 2, it is recommended that the government of PNG, through NDoE, implement the following strategies: