Alexander Palai is a Fulbright Scholar. He graduated with a Master of Laws Degree (LLM) at the University of Miami.  Alexander had polio infection at a tender age of two years old. The infection almost crippled him. However, it did not stop him from achieving his goal of becoming a lawyer.

An inspiring story of determination. Read on…

I was born in a very remote jungle location in the Finschhafen District of Morobe Province in 1962. Two (2) years after my healthy birth, poliomyelitis (polio) epidemic swept through the District. I fell victim to polio. It almost totally crippled my arms and legs. I grew up struggling with my physical disabilities.

I enrolled at the local school when I reached the school-age. Because of my disability, I could not participate in activities that normal children did. I turned my attention to my school work and excelled academically.

I made up my mind very early in school that I had to become a lawyer so I could have a better life. Failure in any stage of my schooling was never an option (as I could not go back and survive in my village setting).

I worked hard to achieve my goal of becoming a lawyer. I was always in the top 1 per cent of the students in the country in primary and secondary schools during my time. And, easily proceeded to study law at UPNG (University of Papua New Guinea) in 1981.

Again very early at law school, I wanted to specialise in the laws relating to natural resources, particularly mining and petroleum law. So after completing law school at the Legal Training Institute (LTI) in 1985, I joined the State Solicitor’s Office of the Attorney General’s Department.

While being employed there as a young lawyer, I elected to go back into hospital to undergo a major orthopaedic corrective surgery to regain proper use of my crippled right foot.

Thankfully God restored the use of the rest of my arms and legs which I struggled with in my school life. I spent about eight (8) months in Port Moresby General Hospital and another 12 months recovering at home.

With all costs met by the US federal gov’t, I boarded the plane and left the shores of PNG (for the first time) and pursued my dream of becoming the first PNG mining & petroleum legal expert.

Study in the US – Fulbright Scholarship

I studied relevant courses and programs at Georgetown University in Washington DC during the early years in the US. Due to my medical situation, I transferred down to the subtropics in the City of Miami, Florida.

In the summer of 1989, I graduated with a Master of Laws Degree (LLM) from the University of Miami. I returned to PNG and assisted with the first oil and gas project in PNG, the Kutubu petroleum project as it is known today.

I spent next four (4) years, in and out of New York City, understudying the world-renown legal experts based in New York City (UNCTC at the 2nd UN Plaza building).

Apart from my academic and professional training in the US, I also managed to visit many iconic sites and institutions. And out of 50 states, I visited 20 states of the United States of America.

My specialized work in the mining & petroleum industry also took me to many other countries in the world.

We saw a tweet from Alexander about his academic life and reached out to him. In fact, we have no idea about his humble beginnings.

We are delighted to publish Alexander’s story. He did not let his disability stop him from achieving his goal of becoming a lawyer. He went to UPNG, studied law, practised law, and received the prestigious Fulbright Scholarship!

An inspirational story of setting a goal early and working towards achieving it.

We publish Alexander’s story through the PNG Writers’ Corner Initiative. This is an initiative to inspire the young Papua New Guineans to set goals, work hard, study hard; and contribute meaningfully to the development of our beautiful country.

If you have a story, share with us. Email us on info@pnginsight.com or message us on Twitter.

Alexander holds a Master of Laws Degree (LLM) from the University of Miami. He is a freelance legal consultant with more than 10 years of legal consultation expertise.

Alexander believes that he has played a small part (among other Papua New Guineans who have done great things for the country) in the last 30 years.

“Life is God’s gift to you, and what you do with it is your gift to God.” Alexander Palai, LLB, LLM. 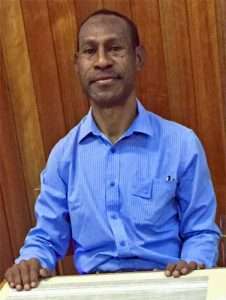