This post about Papua New Guinea Trips provides a brief information for first-time visitors who wishes to know about the country. Included in the post are the latest video compilations of Port Moresby.

Where is Papua New Guinea?

The western end of the country has the largest deposit of Natural Gas in East Asia and the South Pacific. Oil giants like Exxon Mobil and Total have oil and gas developments and production projects in the country.

PNG’s Daru Island is 150 kilometres from Australia’s most northern tip. It takes under 2 hours to fly from Cairns (Australia) to Port Moresby. 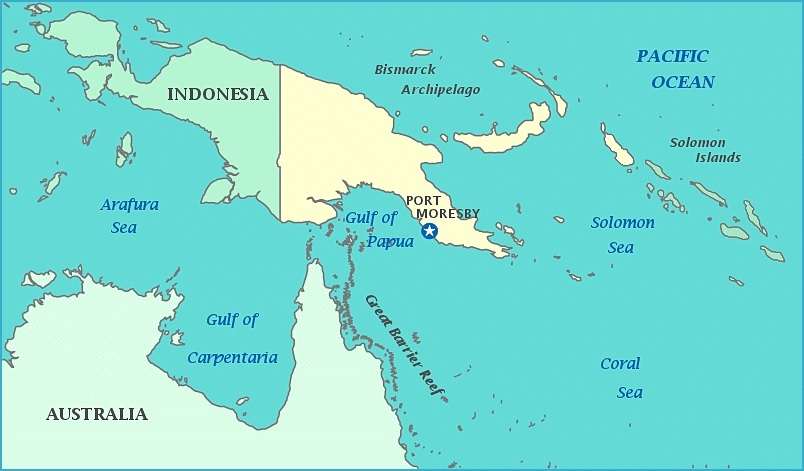 The capital city of PNG is Port Moresby. Its airport is Jacksons International Airport. Since the city hosted the Asia Pacific Economic Corporation (APEC) forum in 2018, the capital city has been given a massive facelift. The city roads are in better conditions. New hotels and accommodations in Port Moresby are better than they were.

The visitors to Port Moresby can travel to Sogeri or Loloata Island with ease. Or, organise a private tour and guide to the Motuan villages at a budget. In fact, the new Loloata Private Island Resort is the place to relax and enjoy the sun, sand and sea.

There are also places to go for day trips along the Motuan coasts like March Girls Resort or Sunset Lodge.

PNG Insight has a range of photos and video collections. Check them out on Twitter or YouTube.

Papua New Guineans are a part of the Melanesian group of people. The word Melanesian (derives from Melanin) identifies people from the Pacific Island group of countries such as Fiji, Papua New Guinea, Solomon Island, New Caledonia and Vanuatu.

There are four regions in the country:

The people from each region are sometimes called Highlander, Nambis or Papuans.

Papua New Guinea Trips to the Regions and Provinces

MOMASE is a synonym for MOrobe, MAdang and SEpiks (the two Sepik provinces are East and West Sepik). East Sepik is sometimes referred to as Sundown Province.

Altogether, there are 4 provinces in Momase region:

The New Guinea Islands is comprised of 5 provinces:

The New Guinea Island region stretches from the far north Manus Island clockwise to Bougainville in the east.

The Highlands, Momase and Southern regions are on the mainland. PNG’s 4 Regions are further divided into 22 Provinces. Each local town of the provinces is in brackets.

Papua New Guinea got its independence from Australia on the 16th of September 1975. Its political governance is based on the Westminster System.

The Queen of England is represented by the Governor-General. The Parliament is headed a Prime Minister, not president.

The three Arms of Government are the:

There is also a three-tier system of national and local governments:

The national government comprised of 88 electoral MPS and 22 provincial governors. The governors are head of provinces who are supported by the local ward council presidents and counsellors.

PNG is in the Commonwealth group of countries. Elections are held every 5 years. The first vote-of-no-confidence on the prime minister is taken on the 18th month after the national general elections and formation of the government.

Thereafter, the VoNC can be called on the government at any time when there is a shift in political parties and numbers.

One of the key facts about Papua New Guinea people (the Papua New Guineans) is that most are living a rural and self-sustaining lifestyle. They collect fresh produce from the gardens, freshwater from the fountains and streams; and use firewood from the forest for warmth and cooking. The rural Papua New Guineans rare animals for meat or for the village feasts.

There is always food, water and shelter in the villages. Above all, there is security, family and community.

Family ties are very strong. Strong family circles, both extended and nuclear lineage, is where every Papua New Guinean finds comfort and strength.

Are there Cannibals in PNG?

The answer is no. Trust me, no human is ever seen eaten alive when they venture on Papua New Guinea trips.

At present day, there is a preconceived idea that there are cannibals in PNG.

In fact, many of the articles are fake news. The articles about cannibals in PNG proliferated by major online websites do not have the right facts and are completely misleading.

The news about cannibalism in PNG has caught the attention of many naïve readers. The online stories had been sensationalised to attract readers. But, these stories had painted a wrong picture of the country.

Online news about cannibals in PNG

Many international visitors to PNG can attest to the fact that the articles on cannibals in PNG do not present the correct information.

Often, the stories were retold based on social media posts or by writers who lack an understanding of Papua New Guinea. In fact, many of these stories are not only fake news but also complemented by outdated images.

Therefore, any online news outlet that runs stories on cannibals in PNG in the 21st century must not, just, base their stories on social media posts or fake stories.

Fake Stories on Cannibals in PNG

It is important that the online media, both international and local media, must establish their facts and sources of stories properly before publishing.

The article titled Korowai People of Papua New Guinea (2017,2009) is a clear example of misinformation. The article said less about the indigenous skill and ability of the people to build houses on stilts and more about cannibalism. In fact, the articles showed recent photo evidence of stilt house and none of the Korowai eating human flesh!

Furthermore, the people of Korowai are not Papua New Guineans. They are from the West Papua in Indonesia. And, they are not cannibals either.

Another fake article was titled the Cannibals on Kokoda (2016). It receives wide online coverage because the couple in the news nearly died whilst walking Kokoda unprepared, and blamed it on the locals. This was a trip that could have ended up in disaster because the couple was stupid.

The Papua New Guineans, Australians and other international trackers who walked Kokoda Trail know that the walks are undertaken in organized trips. That means that you must

Kokoda Track is not for the faint-hearted. No one walks Kokoda Track unprepared and without guides. The couple who attempted the Kokoda Track in 2016 underestimated the walk.

In addition, the couple disobeyed the advice of the local authorities on arrival. They had no money and walked the track with a bare minimum of tracking essentials.

The couple could have died along the way when they attempted the trip on their own. They were lucky they survived and should have been thankful for the Kokoda team who helped them.

Global-View of the Writer

The author of this post is a Papua New Guinea. Grew up in PNG, lived and worked in the United Kingdom. He also visited several other countries in the World: France, New Zealand, Australia, Fiji, Vietnam, Hong Kong. He is a full-time PNG public servant.

The world media often present PNG in a different way. Other people see PNG in terms of what is presented by the media and on the Internet.

In retrospect, visitors to and residents of Papua New Guinea KNOW that PNG is a beautiful country with friendly people.

The writer also believes that Papua New Guinea is one of the beautiful places in the World. It has some of the friendliest people on Earth.

Like any developing country, PNG has its social, political and economic challenges. But it does not mean that PNG is not a good place to live and work or visit.

As the saying goes, you must see it to believe it. The locals say YOU YET KAM NA LUKIM. (Come and experience PNG)

Many things have changed in the last 10 years. The country’s capital, Port Moresby, is now a metro-modern city. There are parks, pools, resorts and entertainment venues for both kids and adults. Modern hotels and private resorts are within an hour’s drive from the city.

Living and working or visiting PNG can be a challenge. But with those challenges come the great rewards. When you live or visit PNG, it is like travelling to a land of diverse cultures and people.

The common saying here is ‘EXPECT THE UNEXPECTED’. PNG is the land of surprises.

Perhaps it is important to know that Papua New Guinea is a changing country. The new Prime Minister of PNG new slogan is TAKE BACK PNG. The PM is appealing to the people of PNG to respect and appreciate others.

The call is to make PNG a better place for all to live together. Therefore, visitors are welcome to venture on Papua New Guinea trips and experience the diverse cultures and people.

Places to visit when in Port Moresby, Papua New Guinea

Here are earlier posts about the things to do when in Port Moresby:
There are also other places out of Port Moresby for the more adventurous spirits like the Koitaki Country Club, March Girls Resort and Sunset Lodge, including Varirata National Park.