Abigail Seta is a journalist with the Catholic Bishops Conference of Papua New Guinea and the Solomon Islands. Writing is her passion. She loves writing features, prose and poetry.

Abigail writes a regular column on Women Empowerment and Gender-based Violence for the Catholic Reporter.

She can be contacted via LinkedIn. 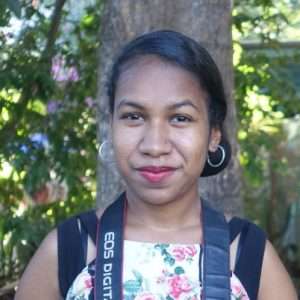 This is the story of a young girl who transferred from a private school to a govt school in Port Moresby. Faced with different surrounding and students, she managed to settle into her new school though she found it challenging. The writer takes you through her first day at Wardstrip Demonstration Primary School.

Her hope is to see young girls and boys enjoy their new schools at first sight. She puts it nicely this way: ‘Every student deserves a proper education and access to [better] resources’.

It was the year 2008, I had just transferred to Wardstrip Demonstration Primary School from a private school (a Christian Academy) to do my grade 7. Upon first glance at my new school, I did not like every bit of it. It was my first encounter in a state-run school.

I remember my first day like it was yesterday because it impacted life from a young age and changed my outlook on the world.

It was a beautiful sunny morning and I remember walking, with my mother and brother, into a school full of rowdy students. The junior students from grades 3 to 5, playing and running around the school oblivious to those around them.

The senior students from grades 6 to 8 were all clustered in their little groups while we, the other new students and I, all stood outside the administration building waiting to be enrolled and assigned to our classes.

While waiting, I began scanning the place and comparing to my old school. Turning to my mother, I asked a little too loudly: “Where’s the canteen?” She slapped my head in response telling me to keep quiet.

The canteen, I found was more like a market where people, especially mothers of students and those around the Gordons area sold cooked food, ice-blocks and sweets on the school grounds.

I also found the toilets in a sad state, run-down and dirty with broken doors with some hanging off the hinges. One would wonder how the students did their business there.

The classrooms had most of their windows broken.

As a lover of books, I was also disappointed to see that there was no library.

Even the bell that rang for the class was not an actual bell. It was a large iron that students struck with a stone to signal the time for class, recess, lunch and home time.

The state of the school surprised and disappointed me. My mother had to explain to me that this was the case for many primary schools in the country.

Walking into a new class

I was assigned to the class 7D which was situated in an old two-storey building which my grandmother said it was there during her time. It had two classrooms at the top and two at the bottom.

As I walked up the flight of stairs to my new classroom with my mother in tow, I became a nervous wreck.

The stairs have no rails. The windows were all broken and the students could see who was outside. Hence, the nervousness, they were all looking out the windows to see who their new classmate was.

Three students to a desk

After being introduced by the class patron to the class, I was put in a desk and much to my dismay, with two other girls. We sat three students to one desk as were the rest of the class. The desks were old with paint peeling off and had graffiti engraved into the wood and written with a permanent marker.

The classroom size exceeded the normal number of students in a class. I found that every class overcrowded which was also the same for a lot of the primary schools in the city.

By midday, I had made some friends who gave me a tour of the school. I learnt that I had to share worn out and smelly textbooks. Unlike the Christian Academy, cussing and using derogatory remarks seemed a normal part of the students’ everyday language.

I struggled to comprehend in the new school. The discipline which I was used to was no more. Hence, by the afternoon, I was mentally exhausted.

My first day in a state-run school was a day of awakening for me. It opened my eyes to see the challenges faced by the majority of young Papua New Guineans. Not only in the ‘heart of the city’ as many teachers tended to describe Wardstrip, but also nationwide.

To this day, I am amazed by the many Papua New Guinean students who attend the state-run schools. How they come out doing well and furthering their education despite the limited resources.

This place was the only affordable means of education for my siblings and me and many students too. I am grateful to the teachers for giving their best every single day. Worn out textbooks and shared desks, we still managed to make it to high school and even further to tertiary institutions.

I do hope the school admins and PNG govt give more attention to creating condusive learning environment in the schools. Especially, by maintaining or building the basic facilities and resources and bring them up to standard.

Every student deserves a proper education and access to resources.

If you have stories like this, we want to hear from you. Here is how you can write for us – we pay you.